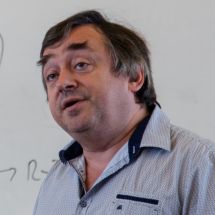 Pavel Lhotak was born on April 5, 1963, in Pilsen, Czech Republic. He studied organic chemistry at the Prague Institute of Chemical Technology (MS degree in 1986), where he then defended his PhD thesis dealing with the "Synthesis and Study of New Organic Luminophores" under the supervision of Professor Kuthan in 1991.

From 1994 to 1996 he spent two years on a postdoctoral stay with Prof. Seiji Shinkai (Kyushu University, Fukuoka, Japan). After coming back to Prague, he became an Assistant Professor, since 2001 (after his habilitation) he became an Associate Professor and since 2006 he has been working as full Professor in the Department of Organic Chemistry, UCT Prague.

In 1997, he was awarded the ‘‘Alfred Bader Prize’’, which is given by the Czech Chemical Society and the Alfred Bader Foundation to young scientists under 35 years. His research interests include synthetic organic chemistry, supramolecular chemistry, especially chemistry of calixarenes, and noncovalent interactions.