Synthesis of inhibitors of DC-SIGN receptor

DC-SIGN is a C-type lectin receptor present on the surface of dendritic cells and macrophages. It binds to carbohydrate structures found on the surface of numerous pathogens: viruses (HIV, ebola, cytomegalovirus), bacteria (M. tuberculosis, S. pneumoniae), fungi (C. albicans), and parasites (Leishmana). The surface of these pathogens is typically rich in mannose and fucose which are natural DC-SIGN ligands. Upon binding, DC-SIGN can mediate the uptake of the pathogen into the dendritic cell and launch an immune response. Hence, DC-SIGN inhibitors could act as anti-infective agents.

Figure 2. Overview of the synthesized DC-SIGN ligands. a) DC-SIGN inhibitors based on D-mannose and l-fucose; b) non-carbohydrate inhibitors binding to the secondary binding sites.

Preparation of nanoparticles with DC-SIGN-targeting ligands

Liposomes modified with DC-SIGN ligands can be used for targeted delivery of therapeutic compounds to dendritic cells.

Figure 3. Nanoparticles modified with DC-SIGN ligands. a) Fluorescent nanodiamonds for the visualization of metastases; b) liposomes for targeted delivery of therapeutic compounds into dendritic cells.

ASGPR is a C-type lectin receptor which specifically recognizes ligands with terminal galactose or N-acetylgalactosamine. It is found almost exclusively on hepatocytes and is already clinically used for ASGPR-targeted drug delivery to the liver. Our aim is to prepare lipid nanoparticles modified with selective ASGPR ligands (Figure 4) and use these nanoparticles to transport CRISPR/Cas9 system into the liver. Several studies have already confirmed the application of CRISPR/Cas9 as a feasible approach to eradicate the hepatitis B virus DNA and thus help treat hepatitis B. 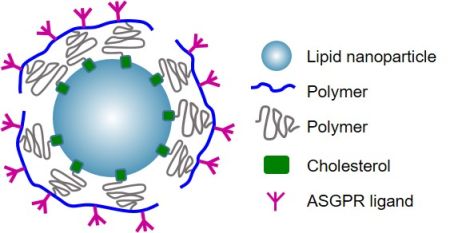 Synthesis of ligands for G-quadruplex visualization

In collaboration with ICMUB CNRS Dijon, France, we synthesize ligands for the visualization of G-quadruplexes. Our aim is to prepare twice-as-smart fluorescent probes that act both as a smart quadruplex ligand (i.e., that assembles only in the presence of its native G-quadruplex target) and a smart fluorescent probe (i.e., the fluorescence of which is turned on only upon interaction with its target). A similar compound, N-TASQ, allowed for the very first visualization of G-quadruplexes in living human cells and since then has been used in oncology and neurology.

Synthesis of agonists of muscarine receptor

In collaboration with the group of neurochemistry from the Institute of Physiology CAS, we have just started working on the synthesis of agonists of muscarine receptors based on tetrahydropyridine. These compounds are promising agents for the treatment of neuropathies.